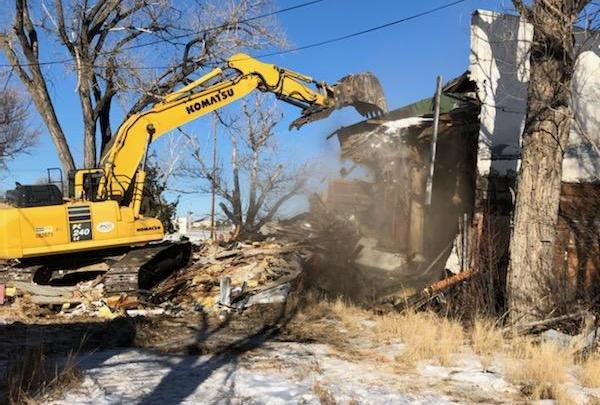 Two landmark businesses in Upton were demolished this past week, the Sage Theatre ((built in 1941) and the Western Bar & Cafe (built in
1940).

Ivy Dillon stated, "My Aunt Fern and Uncle Frank Burdick owned the Sage Theater for many years. I worked there in high school making
popcorn and walking the aisle to keep kid quiet! Lots of fun memories!” Also, remembering that time was David Stahnke, relaying his dad, Earl Stahnke ran the projectors for a time. He recalls that his mother, Donna Stahnke had many meetings at the Western, as did many clubs
in town.

Valerie Ohle tells the Gazette her parents, Ross and Cherrill Brestel, owned the Western Bar and Cafe from 1971 through 1974. Allan Williams said his folks, Art and Ophra Williams, had a painting done by J.W. Benson, the artist who painted the murals. Shellie Lemmerman always liked the brands on the back wall.

Rhodie Sherard fondly remembers having some great times at both businesses, going to the Western after school and sharing a side of fries
and cokes with friends. Many, including Rhodie, got their working wings by washing dishes at the Western. A box was needed for Rhodie to stand on to reach the sink. Viola Butler was also a dishwasher in 1970. It was where she met her husband.

Tammie Mathis remembers her Aunt Betty Gray, making the best cheeseburgers and crispy hashbrowns. Tammie also worked as a waitress for a while. LaDonna Hatch worked at both the theater and cafe during her teenage years. Morgan Clyde remembers going to the bar with his dad, and John Ehrman giving him free cokes and Edith Ballieu, giving him French fries and sour cream.

Dee Suhr had great times at both places. She remembers going to the Sage and watching "Jaws" repeatedly sitting in the very front row. Bruce McAulay remembers helping Craig Bullard (owner Gerald Bullard's son) set up movie reels when they were in junior high.

So many people have commented on the loss of the two buildings. The buildings may be gone, but no one can take all the wonderful memories you've shared.

The UEDB is marketing the commercial property. The murals have been professionally photographed and the board has a few ideas as to what can be done with the photos to share with the community. Local contractors and the Town of Upton worked together for the demolition, disposal and reclamation of the property.

Cheney bill aims to protect private landowners from 30 by 30